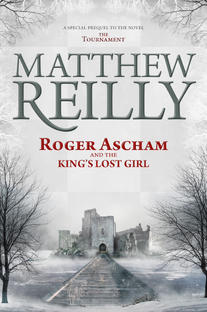 Book 21 of 2015 is Roger Ascham and the King's Lost Girl. It isn't really a book but a short story written as a prequel to The Tournament, which is on my list of books to read.

Matthew Reilly's books are what I classify as Airport Reading. You find yourself at an airport with a long flight ahead and pick up a book that seems like it won't be too much of a challenge and has some action in it. Others must feel the same because I only ever find Matthew Reilly books in airport bookstores and online.

This is a short story that establishes Ascham's relationship with the King and his Sherlock-like skills of reasoning. In fact, it just clicked that this is very much like a Sherlock Holmes novel. I won't be able to unknow this now. Damn.

I now want to move The Tournament up my To Read list. It's still at about #30 though. Maybe when I'm next on a flight.

3 dead prostitutes out of 5.

Should I read this? Only in an airport and with an intention of going on to The Tournament.
What did I learn? People are stealing Sherlock Holmes style narratives and readers aren't realising. Maybe that is ok.
Posted by Damana Madden at 13:38