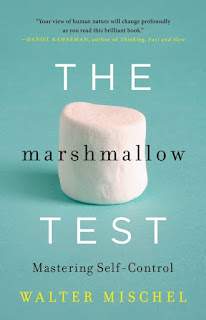 Book 19 of 2016 is The Marshmallow Test: Mastering Self-Control by Walter Mischel.

A book based on a famous psychological experiment that anyone who has had their self-control falter has heard of.

I know the child I would have been. I'd not have taken the marshmallow because I was very obedient and knew to wait for the better option. Not sure that reflects in my current life though. My adult life.

The idea that nurture is as powerful as nature was interesting. This is something I have believed for a while but have not seen backed with a lot of studies.

The way this was written was not that interesting but the studies and interpretations were.

If there had been more tips and tricks for dealing with hot actions, that would have made this more worth the read but it wasn't.

Three marshmallows out of five.

Should I read this? Only if you have an interest in CBT and want more help with what to read more about around self-control.
What did I learn? All this talk of them made me want to eat marshmallows.
Posted by Damana Madden at 00:30 No comments: 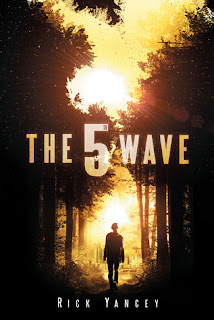 This book has been on list of books to read since 2014. It was actually in my top ten reads and kept getting pushed down the list by other books because I always knew I'd read it one day. It only took two years to get there.

This is another Young Adult book, which is I genre I enjoy for the adventure and very easy reading.

This is another post apocalyptic tale with a strong female lead with a mission that will not be taken from her.

This is another sit down and read in two days book.

The main character Cassie is believable and likeable. There are moments when she says something very teenage girl and then snaps herself out of it. This gave truly gives away the fact that a man wrote her and not a woman. I say this because women can have multiple trains of thought going simultaneously without so deliberately halting a thought as silly and starting a new one. That other way is a very male way of thinking.

Through this book, all the major characters are fighting to save someone more innocent than themselves. It is as if when the world as they new it ended, they fought to hold on to their own innocence. This is repeated and honed as a well played metaphor in this story. Nicely original in many ways. Or at least originally presented.

Four waves out of five.

Should I read this? Yes, if you like sci-fi AND you like young adult fiction.
What did I learn? We protect in others what we lost in ourselves.
Posted by Damana Madden at 09:22 No comments: 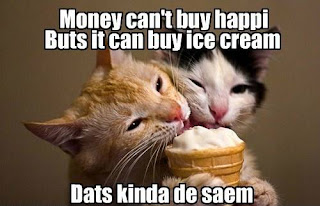 For one week in June, I did not buy anything unless I could without doubt say that I needed it. I didn't go without anything except my purchases made on a whim.

I always track my finances to make sure payments that hit my card are correct and that I'm on track for savings goals. What I do not do is look at what I bought and if that is valid... unless it is a big purchase and blew my usual spendings for the month.

At the end of June, I looked back and found that I spend around $365 less than my average month.

That is such a significant percentage drop and confirmed my inner revelation that I have become an American-like consumer. It actually needs to stop and finally, this is becoming apparent.

I have everything I want and it is as though I need ten of each thing. That is not a good way to think.

Changes, they are a-coming.
Posted by Damana Madden at 08:58 No comments: