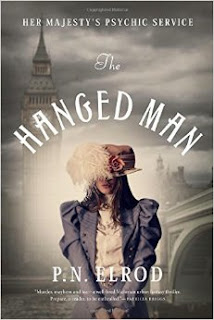 This book took me a while to read because it felt predictable and my guess is that it was written for women who are new to the fantasy genre. Yes, it is very much aimed at women and that is absolutely not a fault.

The book starts in the style of Sherlock Holmes but goes on to include the intrigue of British India and the painfully dysfunctional world of the British aristocracy. This is something I could see happening, minus the magic.

The writing is simple and in the language of the late 1800 and early 1900s and soaks the world of that time in to your mind as you read. That was quite enjoyable.

4 pairs of tough walking pants out of 5.

Should I read this? An easy and enjoyable read with a touch of fantasy..
What did I learn? The world changed when women had the right to wear clothes that didn't totally restrict their movements.
Posted by Damana Madden at 17:22