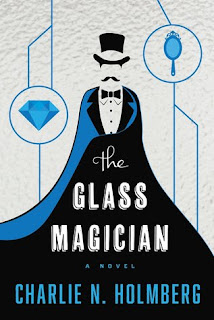 Book 11 of 2016 is The Glass Magician by Charlie N. Holmberg. This is the second book in The Paper Magician series which I read last September.

The first book annoyed at how teenager whiney the first book was that I didn't want to finish the series. It was the reviews from Good Reads users who made me want to read the second book.

The second book is much better than the first and I went straight in to the third. This is mainly due to the female lead becoming less teenage infatuated girl and more grown up. Instead of courting her teacher, she goes out on missions to slay great magicians. This makes me happy.

Three broke mirrors and 14 years bad luck out of five.

Should I read this? Probably not. The first book is not easy to get through.
What did I learn? Competent woman are amazing.
Posted by Damana Madden at 23:20