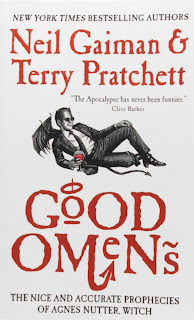 Book 14 of 2016 is Good Omens by Neil Gaiman and Terry Pratchett.

If you've heard my Gaiman (or as I know him, Amanda Palmer's husband) rants then you will know that I love him as a person and have read many of his books. I loved Neverwhere but have not enjoyed much since. Yes, I even diss American Gods.

This book was recommended to me by so many people that I had to give in and read it.

I stand corrected. This is brilliant. That may be due to Pratchett though :p

The idea that the world isn't perfect but it is imperfectly wonderful, is one that I truly share. The pop culture references and hilarious British humour won me over within the first couple of chapters.

This is so good that I didn't want to finish. I am sad it is over.

Five cute hounds of hell out of five.

Should I read this? Yes. Even if you don't like Gaiman's other stories.
What did I learn? Good and evil are relative. I knew that but now more so.
Posted by Damana Madden at 21:10