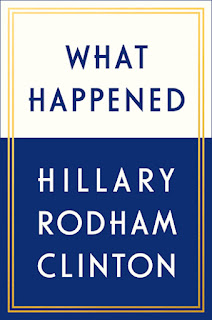 Book 44 of 2017 is What Happened by Hillary Rodham Clinton.

It is rare that I read a book right after it is released but having stood in the middle of the storm that was the 2016 US elections as an outsider watching it unfold, I wanted to look behind the curtain.

There are two sides if not twenty to what happened in November 2016 but this was the one I wanted to understand. How did someone so qualified for the job lose to someone who wasn't? It made no sense to me.

On reading this, I have had some major realisations.

I respect Hillary Rodham Clinton for the strong woman she is and the inroads she has made for women all around the world.

Her politics are still too conservative for me but I put that down to her generation and age. She was born in a different time and a more conservative world than most people in America today. I have no doubt that was one reason people could not connect with her.

And lastly, women are losing well before they even start. To be the first at anything or the only woman in the race is harder than anyone can imagine. You are not judged equally because there are no women to compare you to. So instead, you are judged as not being a man. She articulates this much better than me.

The reason I recommend people read this book is because she gives hope where others use fear. She tries to stand back and work out what she owns in this journey but does not take all the blame. She gets angry and punches out and although it's not ladylike, it's awesome to see. Why must women bow out quietly when they weren't treated fairly in the situation.

You should read it.

Should I read this? If you lived through the election that Trump won and see it as the election that Hillary lost then yes, yes you should read this.
What did I learn? So much American political history from both sides of the fight.
Posted by Damana Madden at 18:30