The Autobiography of Santa Claus 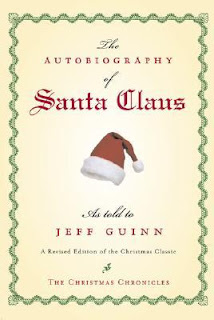 Book 72 is The Autobiography of Santa Claus which is book one of The Christmas Chronicles by Jeff Guinn.

Considering this is the guy who wrote The Road to Jonestown, I was not expecting such positivity but this is fictional. Of course, anything about Santa is fictional but this is told in Guinn's non-fictional tone and that added to the enjoyment of it.

This was an amusing read and one of escapism and nonsense. The historical characters effected by the Forrest-Gump-like Santa Claus were a nice idea... badly executed. This was unfortunate because reading the synopsis had me hoping for something a little more like Bill and Ted's Excellent Adventure through history with a little Christmas magic. It wasn't.

This could be aimed at children and people with little knowledge of history. The historical figures becoming so subservient to Santa was not convincing or explained well by Christmas magic.

This was a flop. Although it is the first of a series, it will be the only one I read.

Should I read this? No. There is little that redeems it. Go for Dickens instead.
What did I learn? The Dutch are the reason for the name Santa Claus.
Posted by Damana Madden at 20:17