The Road to Jonestown: Jim Jones and Peoples Temple 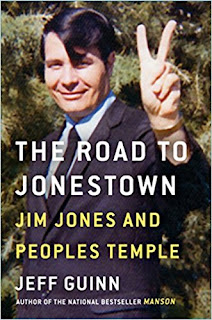 Book 70 is The Road to Jonestown: Jim Jones and Peoples Temple by Jeff Guinn.

After Helter Skelter, I have been seeking similar styles of books which give insights in to famous situations. This is the first I've found that was as interesting. It is not as well written but it is hard to put down.

This book takes you through Jones' life from his childhood with his disturbed delusional mother on to his marriage and building of the church to the final Kool-Aid (it wasn't that brand actually) mass suicide in French Guiana. 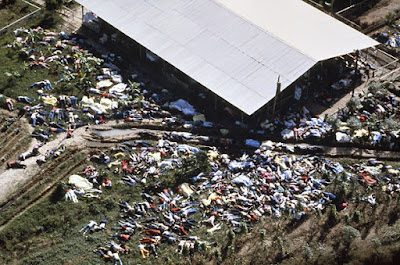 The Jonestown Mass Suicide
It was not so hard to see why people followed him. He just wanted to be followed and sold a left leaning charitable view of his church which seemed to help people. He then isolated and controlled his flock.

We look back and wonder why governments would let this happen but I'm sure no one expects Jonestown. I wouldn't have.

4 miraculous fake healings out of 5.

Should I read this? It's interesting. So, yeah.
What did I learn? I always thought the mass suicide took place in the US. Now I know it was South America.
Posted by Damana Madden at 20:15